We are a grassroots campaigning and educational organization, fighting to bring cheap energy...

Our goal for the Focus Fusion Society is to become an organization of tens of thousands of activists world-wide that educates...

Nuclear Fusion is the process that powers the Sun and all the stars. It is the power that drives the Universe. Fusion power...

Focus Fusion Society is a 501(c)(3) non-profit membership organization. Focus Fusion brings people together to pursue the dream of...

In the Footsteps of Giants 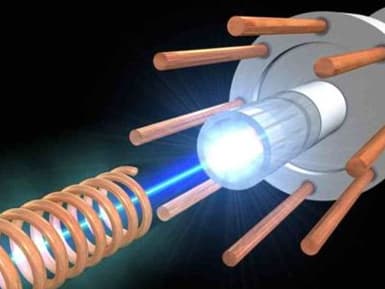 Akin to Tesla's famous image, and in the same innovative spirit, Focus Fusion captures fusion in a "ball of lightning", harnessing its power to create electricity. LPPFusion's Focus Fusion approach builds upon 40 years of international scientific research on the Dense Plasma Focus device which LPPF's physics team has made very significant improvements upon. Instead of constantly having to fight the plasma's natural instability, they are able to use it to their advantage. The device uses a pulse of electricity that generates plasma in a shape that makes it kink itself into a tiny ball of lightning hot enough to fuse atoms. This process releases a powerful beam of energy that can be directly converted to electricity.

From extreme poverty to accelerating climate change, coming generations are facing serious challenges - most of which are made worse by our dependence upon fossil fuels.
There is an urgent need for new and better ways to produce energy sustainably. Read More »
Power for the people - by the people
Crowdfund Fusion
Be part of a clean, efficient energy revolution.

The goal for Focus Fusion, within reach in the next few years, is to research, prototype and manufacture individual commercial fusion units (small enough to fit in a garage or shipping container) that are able to provide energy for a few thousand homes at least ten times cheaper than any known energy source.
Unlike many alternative energy options citing the fusion mechanism, Focus Fusion uses known science, not unsubstantiated claims of trying to overturn accepted science, and has achieved comparable results with about 1/10th the budget. The 10th most abundant element dissolved in seawater. Most abundant element in the universe.